She walks serene and primal... 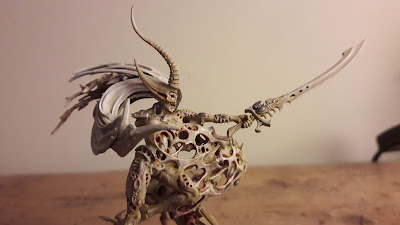 Ynnead was, Ynnead is, and Ynnead shall be. Not in the tides of the warp as we know it, but inbetween. She walks serene and primal. Undimensioned, but useen no longer. - Khalfhirin, Prophet of Ynnead

This is the model that sort of kicked it all off for my interpretation of the Ynnari. I looked at the official Yncarne model and thought...that's impressive and all, but doesn't look like a Death God to me. So I set out to fix that! 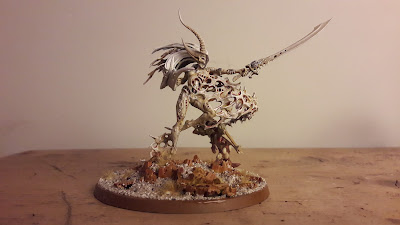 I loved the duality of the official model's face, but just felt they could have gone further... 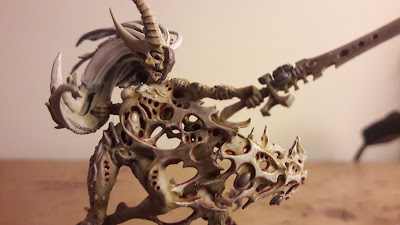 The other half of the face is blank, which is based on a bit of a theory I have about how Eldar perceive death. If you say 'picture the face of death' to a human, they'll probably look at you strangely and go and find another seat on the bus. If you press the matter, they'll probably say 'a skull'. My theory is that if you ask the same of an Eldar, they'll picture a face that's blank. It's a strong motif for Wraith units and Spiritseers and the like, and the blank facemasks you get on Dark Eldar Reavers and Wyches are the equivalent of a skull-mask. 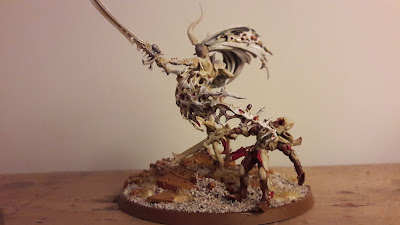 The other thing I wanted to do was show the Yncarne 'in action', rather than a sort of 'strike a pose for the camera' look. Striding across the battlefield was my first thought, but I also wanted to cut down on most of the OTT swirly stuff as it masks the truly gorgeous model behind it. So, I thought' why not have the Yncarne in the process of coalescing from a recently deceased Guardian?'. Helps with keeping her upright too as otherwise it'd just be her tiptoes stuck to the base :S 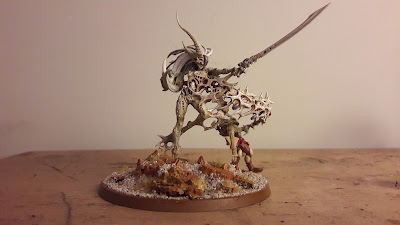 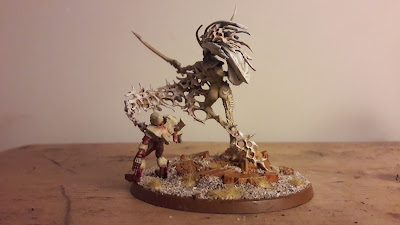 As she was made before I started the rest of my Ynnari the hapless soul is a standard Guardian. I should go back at some point and change the casualty to something that could conceivably fit in a Craftworld, Ynnari, Exodite or True Kin force, but I've got too many projects as it is! Plus, with a bit of creative photography it doesn't matter so much ;) 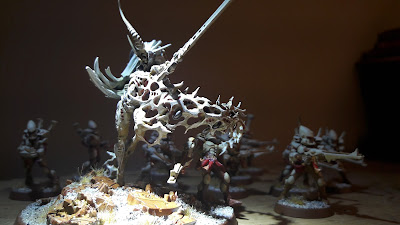 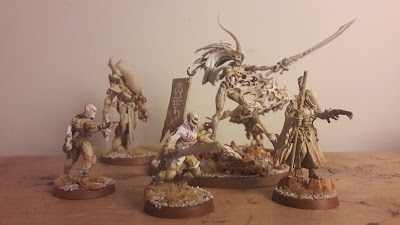 That's up-to-date on the Ynnari so far :) I plan on adding a few more cultists, but for now I'll move on to one of my other projects :)
Posted by Ynneadwraith at Tuesday, July 04, 2017